Recently, the Great Transition Initiative ran an extended online debate which it called The Climate Movement: What’s Next? Participants were asked to give special attention to three questions:

What is the climate movement’s state of play?
What has worked, and where has the movement fallen short?

System change, not climate change?
Does defusing the crisis require deep structural and value changes, or can “green capitalism” get us there?

Do we need a meta-movement?
Does the climate movement need to build overarching alliances with environmental, peace, and justice movements?

Bill McKibben started the debate rolling with this fine piece. My contribution, which I called Globalizing the Movement, is here, and also below. You can find all of the featured contributions at the debate page here.

END_OF_DOCUMENT_TOKEN_TO_BE_REPLACED 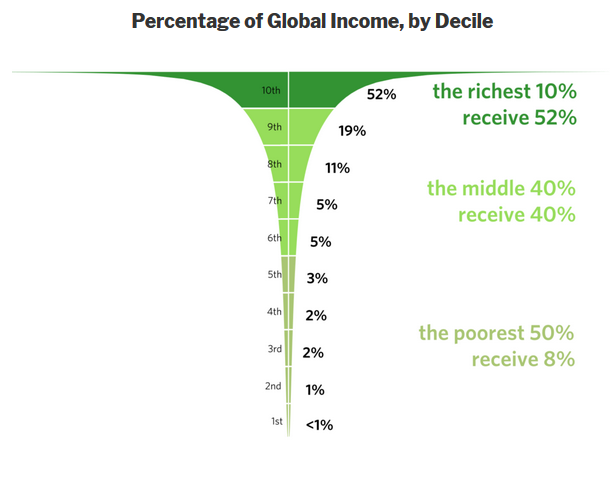 For a cool graphic (but fewer words) see the version of this essay at www.inequality.org

Something has changed.  I’ve been asking people in the climate movement what they think it is, and most everyone agrees.  When did it happen?  After the Paris Agreement, definitely.  But also after Brexit, and after Trump’s election, which put “the emergency” on the map for all to see.  There are lots of data points. In late 2017, David Wallace-Well’s piece in New York Magazine, The Uninhabitable Earth, landed like a bomb.  In mid-2018 came the Deep Adaptation paper, which likewise was downloaded by the hundreds of thousands.  In October of 2018, there came the IPCC’s Special Report on 1.5°C, and afterwards the air was crisper, the view clearer.  It was obvious that climate denialism, or at least classic climate denialism, had lost its legitimacy.  Denialism was just a right-wing scam, and everyone knew it.  And, of course, there were the storms, and the firestorms, and then the Green New Deal resolution, which was a watershed by any reckoning.  To top it all off, there came the Extinction Rebellion, and its unforgettable new exhortations, protest signs that simply said “Tell the Truth!”

So something has changed.  But what’s at stake, exactly, and what comes next?  Wen Stephenson beat me to this (in a fine piece in The Nation) but I’ve reached exactly the same conclusion.  If we had to choose one voice, one single slogan, to represent the pivot that we’re now passing though, it would be hard to beat Czech playwright and ex-president Vaclav Havel and his notion of “living in truth.” [1]  It’s an option more people are exercising, people who are sick of the lies.  Even the comforting lies.

So where are we?  Three points are key.

END_OF_DOCUMENT_TOKEN_TO_BE_REPLACED

The Australian analysts at Climate Code Red are absolutely indispensable, as has been obvious since the 2017 publication of What Lies Beneath. But I’d like to draw special attention to Existential climate-related security risk: A Scenario approach, which they recently published under their new name, “Breakthrough,” which is absolutely not to be confused with the US-based “Breakthrough Institute.”

Seriously, don’t miss this report. It’s mercifully short, and its reference scenario is all too likely. Which is not at all good news. And while you’re at the Breakthrough site, take a look as well at Climate Emergency: What is safe, the 1.5º target, and is the end nigh?, wherein Breakthrough’s David Spratt explains the 1.5C target to an Australian Extinction Rebellion group.

Globalizing the Movement was my contribution to the Great Transition Initiative‘s 2019 forum: The Climate Movement: What’s Next?, which was kicked off with a fine essay by Bill McKibben. It was a fine discussion, though I was the only one to talk about globalizing the Green New Deal