I don’t know who Jason Hickel is, but I’m in danger of becoming a fan of his. His recent piece, Progress and its Discontents, which was published in New Internationalist in early August, has made the danger acute. Just for starters, it’s an excellent, and data-heavy, critique of Stephen Pinker’s infuriating apologia for today extreme inequality. But it goes far beyond this to show how Pinker and his pal Bill Gates torture the poverty stats in order to support a “New Optimism” that obscures just how terrible the global inequality crisis really is.

“Consider this rather strange paradox. The UN’s Food and Agricultural Organization (FAO) says that there are 815 million people in the world today who do not have access to enough calories to sustain even ‘minimal’ human activity; some 1.5 billion are food insecure and cannot get enough calories to sustain ‘normal’ human activity; malnutrition is suffered by 2.1 billion. And the FAO says that these numbers are rising. In other words, the $1.90 [poverty] line peddled by Gates and Pinker would have us believe that there are fewer poor people than hungry and malnourished people, and that the number of poor is decreasing even while the number of hungry is rising. “

I can’t recommend this piece too highly, and this despite the fact that it doesn’t have anything to say about the climate crisis. 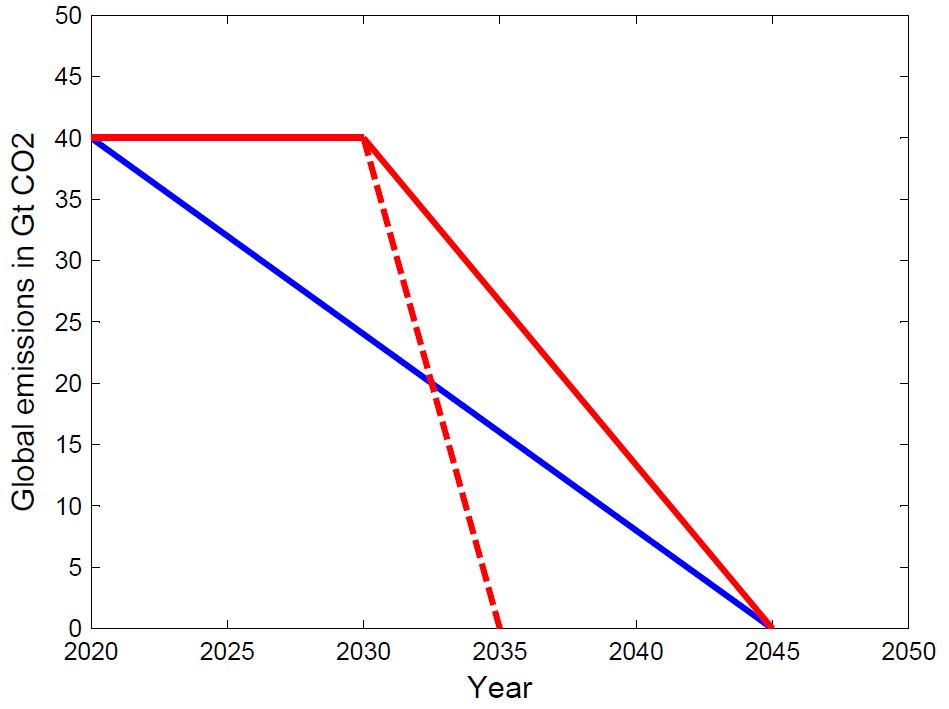 Stefan Rahmstorf is a top-tier climatologist and a great explainer, so I found it notable when, in a recent post in RealClimate (How much CO2 your country can still emit, in three simple steps), he took a few baby steps into the fraught territory of global effort sharing.

His three simple steps are:

I’m not writing to make a comment on Ramsdorf’s first two steps, which are explained clearly and astutely. Though I do commend his discussion of uncertainties, and I worry that he may be a bit too diligently optimistic when it cones to Earth system feedbacks .

And I do like his caution to think in terms of budgets rather than end dates, as per:

“This is why one should not attach much value to politicians setting targets like “zero emissions in 2050”. It is immediate actions for fast reductions which count, such as actually halving emissions by 2030. Many politicians either do not understand this – or they do not want to understand this, because it is so much simpler to promise things for the distant future rather than to act now. “

I’m writing rather to note Ramsdorf’s comment on effort sharing, which manages to be both naive and helpful at the same time. Naive because, once he has made the key point, that “dividing up the remaining budget” is a matter of climate justice, not one of climate science, he chooses to do this division in terms of equal rights to emit C02, which isn’t actually, in this highly stratified world of ours, very just at all.

Why this move? Because he wants to argue that “a principle of fair distribution needs to be universal and simple.” Which per-capita emissions rights certainly are, in contrast to actual justice, which would have to consider not just equality, but also capability (which means wealth) and responsibility (which means facing history).

Why then judge this oversimple analysis helpful? Because Ramsdorf’s bottom line is that “we have to reduce emissions very very fast in the developed world, no matter how you twist and turn it.” (See the comments). And because he adds that there will have to be “a longer tail of emissions from developing nations reaching zero later.”

Both of these conditions, at this late date, are going to be almost incomprehensibly difficult to satisfy. Still, there they are. And if we have to speak very very simply in order to make them understandable, there’s an argument to be made for doing so, even if it violates the prime directive: “as simple as possible, but no simpler.”