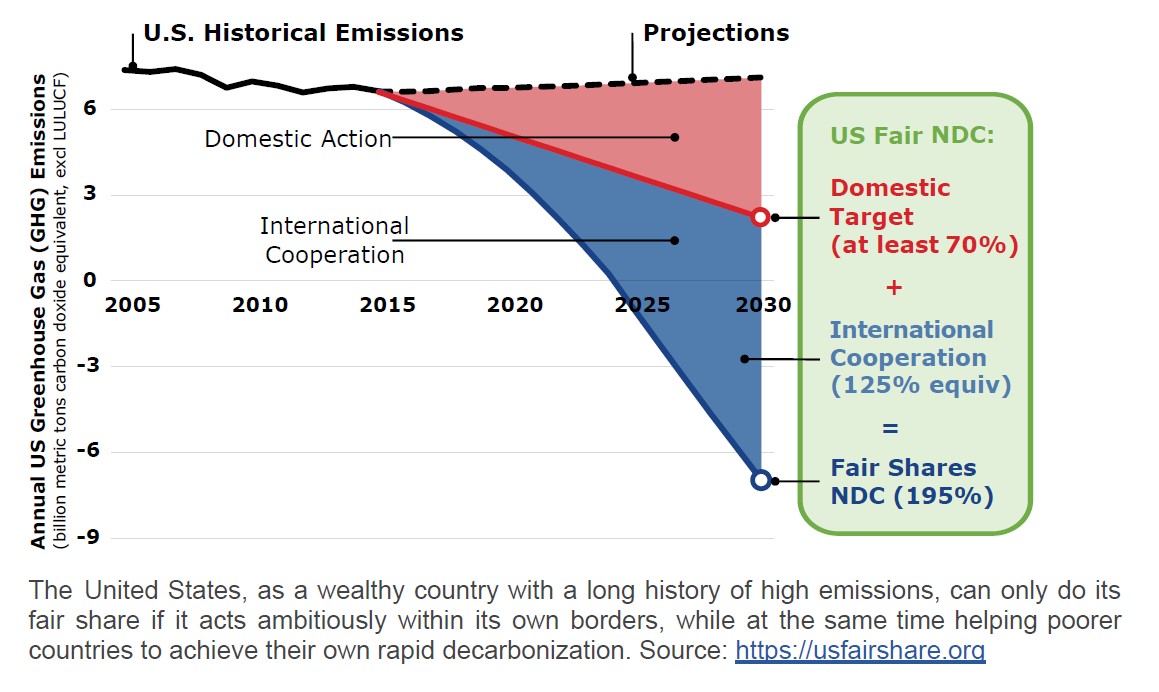 You remember the Paris Agreement, right? As a good thing, right?

There are two reasons why you should. The first is that Paris actually exists, and really could serve as a keystone of planetary climate mobilization. The second is that its “ambition mechanisms” (its “ambition ratchet”) are intended to strengthen the national pledges of action (official known as “nationally determined contributions” or NDCs) over and over again, as time goes by. Such that, when the history of the climate reckoning is finally written, the Paris ratchet will be a crucial part of the story. If it has worked, then all the Agreement’s shortcomings will be forgiven. If it hasn’t, we’ll have to admit, for whatever cold comfort it brings us, that the cynics in our ranks were right, and that Paris was just another false promise.

This isn’t a piece on the ambition ratchet, though I plan to write one. Rather, it’s a quick note to announce the “Fair Shares NDC” that was recently released by a rather ad-hoc coalition of people and groups from the U.S. climate left, for the explicit purpose of modeling the actions we believe the U.S. should actually be pledging, in this the pivotal first year of what promises to be a pivotal decade. We don’t claim the Fair Shares NDC is perfect—this is a work in progress—but we do claim that its asks, “unrealistic” or “utopian” though you may judge them to be, should not be casually set aside, not if we  intend to achieve the Paris temperature goals. Rather, at a minimum, take the Fair Shares NDC as a standard against which to measure the Biden Administration’s more official offering.

One key bit of context—the climate mobilization has now begun in earnest, and it wasn’t Paris that set the spark. Paris didn’t hurt, but if you look back for the single best marker, the one that most clearly illuminates the end of the denialist interregnum and the beginning of today’s struggle towards seriousness, you’d be better off choosing the IPCC’s special report on Global warming of 1.5°C, which somehow managed to shift the frame. You can see this in the shape of the current negotiations, in which countries around the world are being asked to announce commitments to reduce their emissions to “net zero” by 2050. This figure comes directly from the IPCC report, which told us, among much else, that we had best do our damnedest to hold the warming to 1.5°C, and that this means global reductions of about 50% by 2030. [i]

There’s a lot to say about these numbers, but the point here is only that they’ve gone viral, and mainstream, and indeed have taken on an almost normative air. You’re nobody, these days, if you haven’t made a net zero 2050 pledge. Which is not the problem. The problem is rather that ours is a world in which some countries are fantastically rich, while others are not, in which some countries have emitted huge amounts of greenhouse gases, while others have not, and yet the international pressure to achieve a universal push for unconditional national net zero 2050 pledges takes very little account of these defining facts. To the point where now, with 2030 pledges high on the agenda, even rich countries like the US can get away with adopting the global average figure—a 50% by 2030 reduction target—and expect it to be widely accepted as being, well, fair enough.

The problem is that the 50% number—which the IPCC asserted as a global 2030 reduction target—is not in any way a proper guide to national fair shares, nor will it ever be. There is no future in which the 2030 US fair share, and the 2030 fair share of, say, Sierra Leone, are going to be the same. Which brings us to the question at the heart of the Fair Shares NDC—what should the U.S. pledge in its new NDC? Or, more precisely, what would it pledge if it was actually proposing to do its fair share, relative to the demands of the 1.5°C global temperature goal, and in the light of its outsized national wealth and responsibility?

This is a big question, and I’m going to duck most of the details by just noting that it was answered a while back, at least within the US Climate Action Network, which has officially agreed to support a US fair shares target of 195%. More precisely, USCAN has laid down the following marker . . .

“USCAN believes that the US fair share of the global mitigation effort in 2030 is equivalent to a reduction of 195% below its 2005 emissions levels, reflecting a fair share range of 173-229%”

. . . and now, as a bit of a follow up, our ad-hoc coalition has released the Fair Shares NDC, which builds upon the USCAN position in two key ways. It’s wide ranging, for one thing—there’s more to a national NDC than just an quantified action target—and, the point here, it breaks down that rather boggling “195%” into more easily digestible terms.

Action Aid is a core member of the US fair shares group. Here’s how they put it:

“According to the analysis that provides the basis of the Fair Shares NDC, the United States must commit to the equivalent of 195% reductions in greenhouse gas emissions by 2030 compared to 2005 levels. That’s about 14 gigatonnes (billion metric tons) of greenhouse gases annually by 2030. In order to reach this goal, the United States should aim to do two things:

* support developing countries to reduce their emissions by an additional 9 gigatonnes annually by 2030 – thus making up the remaining 125% of our 195% target.

We worked through a variety of methodologies to figure out what that 125% target for international support would look like if we converted it into dollars. The answers vary widely, but all credible estimates are in the trillions. In the Fair Shares NDC, we call on the United States to commit to providing $800 billion in public climate finance for the period 2021-2030, as a down payment toward a fair share that is in reality much larger.”

One other point, lest you think this analysis, well, unrealistic. What we’re doing here is asserting a new kind of realism, in which we center the actions we see as necessary, rather than those we think we can immediately get. Which is also why the Fair Shares NDC doesn’t restrict itself to mitigation, but rather takes adaptation and loss & damage costs very, very seriously. The $800 billion we’re asking for is divided into three partitions; the $267 billion (for the decade) that’s for mitigation is matched by an equivalent figure for adaptation, and matched again by an equivalent figure for loss & damage. To see the details, click over to the Fair Shares NDC and look at the technical annex, which summarizes the very preliminary costing data available on all three fronts—mitigation, adaptation, and loss & damage—and shows, in painful detail, just how low-ball a number $800 billion really is.

A few additional points. First, it really is true that we imagine the $800 billion as a good faith down payment. We absolutely don’t expect the U.S. to pay its entire fair share in the absence of a multilateral accord in which other wealthy countries do the same. Second, it’s past time to get clear about mitigation costs. To wit, the renewables revolution is real. Solar and wind and efficiency are in fact getting so cheap that fossil energy can’t successful compete with them in anything like a “free market,” were such a thing to exist. But this doesn’t mean the overall cost of the energy transition is going to be “net negative,” as techno-optimists keep insisting. Such claims ignore the tremendous challenges presented by the 1.5°C target, and pretend that a rapid renewables transition will occur without significant transitions costs, and it will not. See the Annex in the Fair Shares NDC for a more detailed discussion of these points.

All of which is to say that any US NDC that commits to a 50% by 2030 domestic emissions reduction target, delivered with no additional stipulation of international support, is utterly incompatible with both a fair shares analysis and the 1.5C goal. The 195% target, on the other hand, is actually quite reasonable, which you can see by breaking it down, step by step, from the initial responsibility and capacity calculation, through the conservative costing on all three fronts, to the final step in which only a down payment would be unconditionally tabled. Not, of course, that we expect beltway realists to grant this point, not easily in any case, but it stands nonetheless. Much greater ambition is needed from the United States if we’re to avoid climate injustice on a catastrophic global scale.

It’s helpful, in all this, to remember the so-called “Overton window”, which Wikipedia defines as “the range of policies politically acceptable to the mainstream population at a given time”. The point is that such policies, which are typically considered moderate or realist, are by definition too small and incremental to stabilize the climate system, a goal that, at this point, requires an end to fossil fuel emissions, and indeed an end to the extraction of fossil fuels. What then must we do? The answer is obvious—we have to get as much immediate action though the Overton window as we possibly can, and we also have to expand the window, so that much larger structural transformations also come to be “politically acceptable to the mainstream population.” We have to do both of these things at the same time. There is no choice, not if we honestly hope to achieve the Paris Agreement’s temperature goals.

Thus, the Fair Shares NDC lays out a series of actions the Biden administration could take, and policies that Congress could implement, in order to meet the massive level of action required if the United States is to do its fair share. We recognize that these actions and policies add up to huge, transformational changes, and we do not expect them to be achieved, in full, while the cold civil war against the lunatic authoritarian nationalists of the right defines the parameters of acceptable political ambition. But we do expect them to be honestly debated.