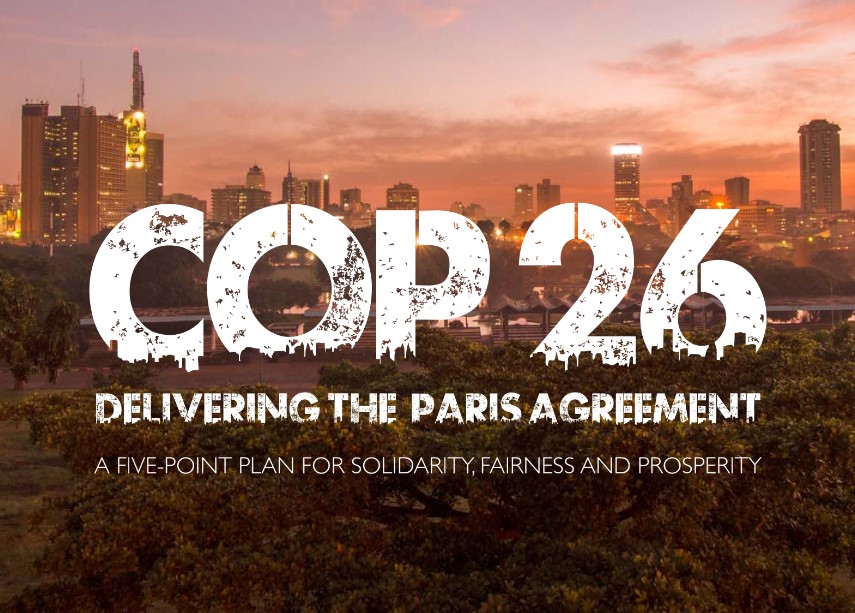 I’ve recently found time to read COP26: Delivering the Paris Agreement: A Five-Point Plan for Solidarity, Fairness and Prosperity, and I urge you to do the same. If you’ve been wondering what to expect from, and what to demand of, the upcoming climate talks in Glasgow, this is an excellent place to begin.

The title here – Delivering the Paris Agreement – sets the frame. Nearly 100 developing countries have endorsed this five-point plan for winning success in Glasgow, which is written in the belief that COP26 is “a time of both maximum need and maximum opportunity.”

The North’s activists are often quick to dismiss the climate summits as empty talk shops, but the South’s negotiators cannot afford to be so glib. Thus, the focus of this plan is the possibility of substantive wins, now and in the next ten years, wins that are absolutely necessary if the Paris Agreement’s temperature goals are to remain within reach.

The plan’s authors, many of whom have spent long and bitter years worrying the climate talks, could easily itemize the compromises and limits that define the Paris Agreement, but they call instead for its full and immediate implementation. This is a realism that centers the interests of the poor and the vulnerable, which happen to overlap considerably with the interests of humanity as a whole.

The goal here is to empower the developing countries, and in particular the poorest among them, to effectively do their part in a proper planetary mobilization. Which is why the plan prominently features core finance provisions designed to accelerate emissions cuts around the world, even as it also increases funding for adaptation and disaster management in vulnerable nations.

Mohamed Adow, the director of Power Shift Africa, is one of the plan’s driving forces, and having worked with him for years, I can testify to the focus of his intention. The same focus is visible throughout this plan, which demands a spotlight on vulnerable nations’ “assessed needs rather than an arbitrary political pledge by rich countries”. The details follow from this approach, as do the asks, and though they’ll seem exorbitant if viewed from the perspective of, say, Washington DC, they are in fact extremely minimal. Indeed, they are explicitly framed as “the bare minimum”.

This plan, even if fully implemented, wouldn’t deliver the grand transformation needed to stabilize the climate system. But it would help a great deal, which is why The Least Developed Countries group, the Alliance of Small Island States and the African Group of Negotiators have all backed it.

But be clear. This plan does not capture the limits of the South’s aspirations. And as the next round of climate talks begin, southern negotiators will certainly step forward to go further. Some already have. In any case, the many kind words that “fair share accounting” receives in these few pages are a clear signs of an underlying vision that goes far beyond the bounds of realism-as-usual.

Still, the journey of a thousand miles begins with one step, or in this case with five.  Here they are: