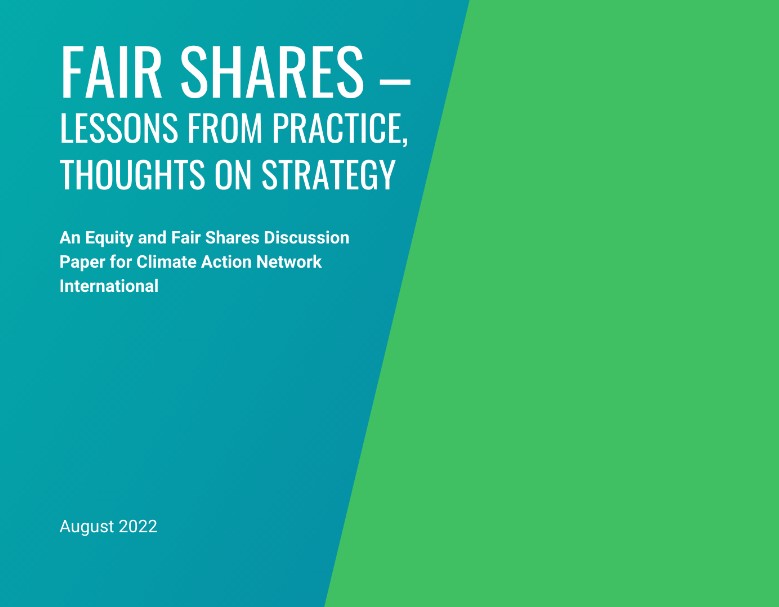 The climate fair shares idea is no longer novel. But as the planetary crisis deepens, its profile is changing. Humanity is facing a civilizational emergency – a polycrisis with both climate and injustice at its core – and we need big ideas that can help guide us out of it.

This discussion paper, which was prepared by the Climate Equity Reference Project for the Climate Action Network International, is focused on one such idea: climate fair shares. Its purpose is to support analysis and campaigns for equitable climate action, including – quite explicitly – greatly increased international climate finance flows.

Note here a political premise — the equity challenge cannot be set aside while we concentrate on “implementation.” To be absolutely clear — we are in trouble, but a rapid global climate transition can still be achieved. We have (all) the money and (most of) the technology we need. But it is hard to see how any sufficiently rapid transition will be possible unless the benefits and promises and also the unavoidable pain and disruption are shared amongst the people of this world in a way that is widely accepted as being fair, or at least fair enough. We can not follow, yet again, the all too often repeated pattern in which most of the benefits are captured by those who are already wealthy and powerful, while most of the pain and suffering is born by those already marginalized and oppressed.